About the Manx Breed

Read about the Manx history and what makes them them best cats in the world.

The Manx cat is a highly stylized creature, and is distinctly different from the common domestic household cat. Some of the Manx cats have very few of the breed’s unique physical characteristics and some have all.

The Manx cat is a natural breed of cat and is thought to have evolved on the Isle of Man, which is a small island located in the Irish Sea midway between Liverpool, England and Belfast, Ireland. The island is small and very enchanting; it is only thirteen miles wide and thirty-three miles long.

They may have descended from the tailless cats native to Scandinavia, brought to the Isle by Vikings. They also may have originated on the Isle and been taken to the other Scandinavian countries. Since the Isle has had no indigenous feline species from which the Manx could develop, domestic cats could have been introduced by human settlers and explorers, but who and when is not really known. Some also believe that the Manx is descended from the British Shorthair, which could be likely given the proximity of Britain to the Isle. Over time many trading ships stopped at the Isle, possibly the Manx ancestors came from another part of the world. There are many stories and myths on how the Manx arrived on the Isle and how the breed lost its tail. 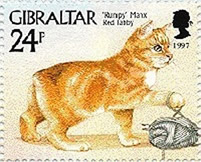 The myths of the Manx go all the way back to Noah’s Ark and how the cat was late to climb aboard and, while apologizing for the delay, promised to pay for her. “I will catch mice to pay my way,” the Manx told Noah. So he opened the door, she started to walk through as the door came down and cut off her tail.

An old folktale is that a dog disliked the cat from the start and it was he who bit off her tail for spite. When the ark stopped at Ararat, the shamed cat ran off and swam to the Calf of Man. The quote of Noah myth, “Thus tailless Puss earned Mona’s thanks. And ever after was called a Manx.” A tale from the Isle, where the Manx is thought to have originated, has a Celtic essence. Cats who are put out at night and find their way home again are thought to have been let in by the little people.

The king of the Manx is a cat by day and a little fairy king by night. It is said that he travels the roads in a fiery carriage. The person who has treated the cat king poorly that day, for when night comes, so does the king’s vengeance. The Isle also tells that Manx cats were hunted down by invading Irish warriors who cut off their tails for trophies. Another story suggests Phoenician ships brought the cat from Japan, while another legend describes the cats swimming ashore from a Spanish Armanda shipwreck. Another myth has quick thinking mother cats bit off the tails of their kittens to stop invaders snatching them away by the tail. Lastly, the Manx is a cross between a cat and a rabbit, which for the record is not possible.

It is very fascinating to know the origins of any breed of cat. Many Manx cats of today look like an ideal written version and the description has been revised as early as 1889. This is a result of selective breeding that has changed the Manx in subtle ways from their ancestors from a few hundred years ago. Early cat photos from the Isle illustrate some of these differences. By examining the Manx of today you can identify these qualities, which set this breed aside from any other and make it quite unique.

The Manx cat is often described as round all over. The ideal Manx can be drawn in a series of circles. With many aboriginal wild cats, a long back leg, or the height of the hindquarters, is important to the Manx cat. In feral cats it is a quality that allows the cat to leap, bound and sprint at will. It is a characteristic important for survival of wild cats and is possessed by the Lynx, Bobcat species and also to the Manx cat. A balanced cat, or correct proportion, has short front legs to accommodate the action of the longer back legs. When a cat in pursuit, the back legs produce much power to propel, while the front legs are lifted off the ground. Gravity pulls the shorter front legs to the ground within stride, then the back legs are suspended to reposition for the next stride. The Manx has a pleasing appearance when the body is a long from the rear to the point of the shoulder, as its back legs are tall. Neither to short in the body or too long are good features. Another unique quality is of the Manx cat, which is not common to other breeds is the breadth of chest. The elbows or joints on either side of the chest have the appearance of turning outward slightly. All these characteristics combined with those mentioned earlier only perfects the overall appearance of the Manx cat being round. The Manx cat has a different gait from the common domestic cat. Sometimes the Manx gait can be misconstrued as incorrect but in fact it is purposeful and very useful to the cat.

The Manx cat anatomy has shown vertebra of the neck measured shorter than those of other breeds or domestic cats. This gives the appearance of no neck and adds to the roundness of the cat. The natural arch of the back, from the neck to their round rump, is important to complete is overall round look. The Manx cat head should appear to be round as well. The Manx cat should have a round head and prominent cheeks. Also a well-developed muzzle is important and definite whisker break with large rounded whisker pads. The ears are to be set slightly outward and resemble a rocker.

The Manx cat is full of personality to say the least. A famous saying, “Manx may be short of tail, but long on personality.” Manx adapt well to most situations. They are intelligent, generally sweet and even-tempered, and friendly. This breed of cat forms strong lasting bond of love and trust with their humans. Also, they are very playful and active even into their later years. Remember Manx are exceptional jumpers and quick to react because of their powerful hindquarters and back legs. They are excellent mousers and love a good game of fetch. For this reason, the Manx is sometimes called “dog-like”. Patience is a virtue when it comes to Manx. They will wait for you and follow you in whatever you are doing and make it a point to get involved. Manx will stay by your side in work, play or sleep.

When is comes to the Manx there are different length of tail. It is a common inaccuracy to think that all Manx cats are tailless, this is not so at all. Some Manx are born with a piece of cartilage at the base of their spine, this known as “risers”. Others have a very short “stump” of a tail and known as “stumpies”. Manx can also have a normal full-length tail and are known as “longies”. Of course the completely tailless Manx are known as “rumpies”.

Manx cats have a glossy, very soft and double coats, they either are shorthaired or longhaired (also known as “Cymrics”). The longhaired Manx (Cymric) is identical to the shorthaired version in every way but for coat length. The Cat Fanciers Association considers the longhaired Manx and shorthaired Manx to be in two separate divisions. The Manx can be seen with just about every color and pattern. An average weight and size of a male Manx is approximately 10 to 12 pounds, and a female can range from approximately 8 to 10 pounds.